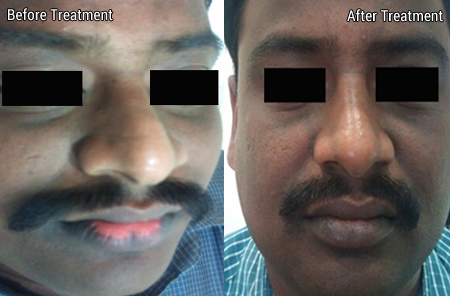 Vitiligo is also known as 'leucoderma'. It is an auto-immune condition and may have a genetic predisposition. Treatment of vitiligo usually takes a long time. Medical treatment helps arrest the spread of depigmentation and in some cases, may bring back the pigmentation. In majority of the cases, medical therapy only achieves stabilization of the vitiligo patch but fails to cause repigmentation. However, repigmentation in cases of 'stable vitiligo' can be achieved by various dermato surgical techniques.

1. What is is the role of puva in vitiligo?

PUVA therapy enhances skin re-pigmentation. An oral psoralen compound is given to the patient. Two hours later, the de-pigmented patch on his body is exposed to ultraviolet-A (UVA) rays, for a fixed time duration. This should be supervised by a medical personnel. If UVA is not available then the patch is exposed to sun rays. The latter is known as PUVA SOL therapy. Treatment with UVB rays is another option. The most recent modality is treatment with Excimer laser.

2. What are the various surgical modalities available?

When the de-pigmented patch does not increase in size for a period of two years, it is said to be stable. This is the right time to perform vitiligo surgery. If the patch is growing or is in an active phase, it needs treatment with medicines and / or PUVA till it stops growing. Method to be used depends on the type and site of lesion. Hence, selection of the appropriate surgical technique is important for good cosmetic results. Surgical therapies includes Mini-punch grafting, Thin split-thickness grafts and Suction blister grafting.

3. What is the role of transplant therapies?

Transplant therapies include transplantation of pure melanocytes or melanocytes and keratinocytes together. In either technique the area with vitiligo that is to receive the transplant is roughed up or abraded, sometimes with a laser, then a dressing with the melanocyte mixture is placed on the site and covered until the area heals. Some form of light is often used to help stimulate the pigment to spread out.